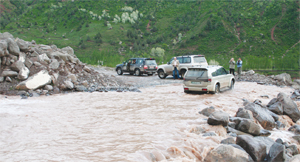 A UN delegation to Tajikistan to assess the prospect of pioneering adventure tourism, found a convoy of Land Cruisers, plus a lone Mitsubishi Pajero, coping with strange customs and some interesting off-roading tests.

If creationist zealots ever mount an expedition to find where God hid his shovel after six days of hard yakka, Tajikistan’s Gorno Badakhshan Autonomous Oblast, with 93 per cent of it mountains and the remotest extent of the former USSR’s most distant republic, is likely to feature high on the list of potential sites. Cut adrift when lines of centralised control were severed and generally described as being on the losing side in a miserable post soviet civil war, the GBAO’s population has suffered years of hardship.

Today, both confl ict and food crises are history and with the help of the Aga Khan Development Network (AKDN) the region is seeking to reaffi rm its identity. Humbling 7000-metre peaks of the Pamirs and Hindu Kush erupting from Central Asia’s most active seismic zone; a liberal Ismaili majority in an otherwise Sunni Muslim country; and Afghanistan and China as neighbours are just some aspects of GBAO that, at the very least, keep things rather interesting.

In May 2010 I travelled with a United Nations team, in a mixed bag of 100 Series Land Cruiser GXs and a Mitsubishi Pajero, tasked to assess the prospects for pioneering adventure tourism in the GBAO, a mechanism that has elsewhere proved successful in injecting grass roots economic impetus without the need for major infrastructure investment.