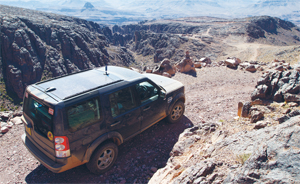 Despite all the major changes that have occurred in North Africa over the last year or so, one place remains accessible for the enthusiastic off-roader. But is Morocco the place that you should consider for your next overland trip? Here we offer some first hand experience.

Recreational off-roading covers a wide range of activity, from short-range hardcore trips to round-the-world epics. Most people fall somewhere in between, but constraints of time and budget mean that options can be limited.  That’s why Morocco is a popular destination, offering a taste of Africa yet being near enough to Europe to fit within an annual holiday. But what can you expect from such a trip? To find out, I joined Trailmasters on their Draa Valley Expedition, a two-week trek designed for the more experienced off-roader.

A good overland trip is hard to define, but one is factor is the environment, and Morocco does not disappoint with stunning scenery varying from harshly black mountains to ancient, wide dry rivers, salt lakes, forests and narrow, rocky gorges and the Sahara desert with its dunes. Then there’s the driving, consisting primarily of dirt roads in various stages of repair, some rocky sections and small sand dunes, all in general needing high clearance rather than low range. That was enough for interest but not difficult, just the way it should be on a long trek. We had the option to drive Saharan dunes at a campsite, and that provided more of a challenge for those who wanted it.

Another aspect of overlanding is the cultural experience, and we found there to be two Moroccos – one part was along the coastline, which could have been any southern European country with surf shops, tourists wearing shorts, normal toilets, familiar eating and shops selling overpriced trinkets. The other, far more interesting part was where we spent most of the time – places where people wore more traditional dress, lived in huts in the desert, did not speak English, the side streets were dirt, the toilets were porcelain holes, donkeys were used for work and the shops sold the food the locals made, sold and ate.

There’s one big question people ask – ‘is it safe’, meaning are they to be accosted, mugged or otherwise bothered by other humans, as opposed to safety in the sense of remote-area travelling techniques. That can be hard to answer, given everyone has their own definition of ‘safe’, but never at any point on the trip was I concerned, be it in deserts, small towns or the large towns, and I made a point of walking through the smallest back streets I could find, dodging children, cats and water being thrown out of mud-hut doorways. Nobody gave me a second glance, although I had concealed my camera and was walking as if I knew where I was going. As I passed, I heard the sounds of domestic life – arguments, scoldings, music, laughter, crying babies and earnest discussions echoing from open windows. Moroccans are industrious, the country seems to be on the up and there is activity to build or replace. While they don’t have a lot of money, there isn’t any sense of desperate poverty, the few people who are idle seem to be resting as opposed to loitering, and I saw no gangs of youths nor any evidence of crime. The locals will beg on occasion, but mostly they’re trying to sell you something. Furthermore, there are no animals in Morocco that consider humans a food source, and while there are snakes and scorpions the danger they pose to humans is vastly, vastly overrated. Yes, Morocco is safe, and one of group noted that Moroccans tolerate foreigners in the way some Middle Eastern countries do not.

So Morocco offers everything you’d want for an off-roading exploration holiday. The next question is how you should best enjoy it. At one extreme you have a tour, where you’re bussed from one location to another, everything is taken care of for you and all you need to is remember to be back by the bus in thirty-seven minutes. If you’re reading this magazine that’s probably not your idea of fun and it’s not what a self-drive off-road tour is all about, and nor will you experience anything other than the touristy parts of a country. Then you have expedition tours where you drive your own car with a leader who has defined the route, stops, things to see and so on and that’s the Trailmasters model. You’re expected to be self-sufficient, keep up and be organised. The other option is ditching the leader entirely, and planning your own trip, either solo or with a group.