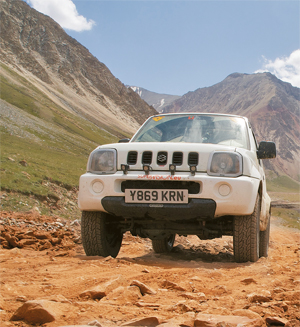 American Scott Brady is a highly experienced overlander and expedition leader. Buying a second-hand UK registered Suzuki Jimny, unseen, and driving it across Europe and along Asia’s infamous Silk Road made his eyes water at times…

Carbon monoxide poisoning is not a good way to die. It is relatively painless, sure, but hardly glamorous. The symptoms begin with lightheadedness, which we began to feel after a few minutes of being trapped in the longest tunnel in Central Asia. We had just cleared the border with Uzbekistan and Tajikistan, and somehow had picked up a Russian school teacher who was hitchhiking along the route. We managed to stuff her into the back seat of our Suzuki Jimny, but I think she was just happy to not be walking… at least until we entered Anzob Tunnel. The tunnel, a joint project with Iran, is more commonly known as the ‘Tunnel of Death’, or for the more optimistic Tajik, the ‘Tunnel of Fear.’ Supposedly finished in 2007, completion seemed more an indicator of running out of money than anything worthy of a ribboncutting ceremony. The tunnel was a critical project, as before its completion the northwestern corner of Tajikistan was cut off from the rest of the country throughout winter. For us, the tunnel meant access to the ancient Silk Road

Our trouble started when construction crews halted traffic out of the southern exit. As in most developing countries, the oncoming lane is fair game, which now meant both lanes were filled, and stopped, in our direction. We were about 60 per cent through the tunnel’s 5km length. No big deal, we thought at first, so we stepped out of the Jimny to join the rest of the tunnel’s captives and assess the situation. The problem was that none of the truck drivers had turned off their engines. After just a few minutes outside of the vehicle, the exhaust fumes were overwhelming and the three of us retreated back into the Jimny and closed the doors and vents. Nearly 20 minutes passed, my eyes were starting to water, and it was clear people were beginning to panic. This is when the honking began; from every truck and car in the tunnel, echoing off the rough walls and potholed floor in a deafening timbre. The construction workers must have got the hint and started to let traffic out slowly, but nowhere near fast enough.

My eyes and throat were on fire and I felt about six shots into an all-night binger. Our hitchhiker had her head buried in her hands trying to stay calm and Charlie had his head wrapped in a sweatshirt. We were inching forward and could see some light ahead when people started running past us; just a few at first, their shirts pulled from their backs and covering their mouths in a desperate attempt to filter the toxic air.

Read more about this 4×4 adventure in the February 2013 issue of 4×4 Magazine. Buy it or subscribe here