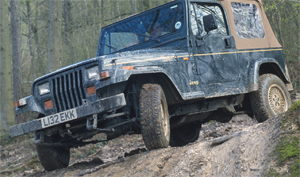 Whether you want an affordable car for off-roading fun, a comfortable cruiser to accommodate the family on a long drive, or perhaps just something different with rarity value, there’s something for everyone…

OFF-ROAD FUN
Jeep Wrangler
A combination of perceived iconic value and relative rarity have contrived to keep the value of old Jeeps at a surprisingly high level – we’ve seen a 1990 Wrangler being offered for sale at £7000 which, even allowing for the half-tonne of chrome trim that had been bolted on to it, was patently ridiculous; similarly we were horrified to see bidders at a recent auction paying £1500 for a shabby 1992 example, dented by hard off-road use, on smooth tyres and lacking tax or MOT. However, we have also seen a few well-maintained examples – though some with over 100,000 miles on them – from 1993 and 1994 going for under £2500. Bear in mind that this is the first-generation YJ Wrangler, easily identified by its rectangular headlamps, which in standard form rides low on rather small wheels and is therefore not quite as competent off-road as the later TJ; however it’s not difficult or particularly expensive to give the leaf-sprung YJ Wrangler a lift to enhance its ground clearance, after which it becomes one of the best fun-factor off-roaders to drive and to be seen in. The car should have its GRP hardtop attached, this can be unbolted and removed for that brief period of sunny summer. The 4.0-litre straight-six is the one to buy, for its power and reliability, most will have the automatic transmission, though a rare few had a five-speed manual. The 2.5-litre four-cylinder alternative is underpowered, the engine overworked and prone to excessive wear, listen for unexpected rattles and knocks, look out for oil leaks and grey exhaust smoke.

Nissan Terrano II
Here’s a car that surprised us on two counts when it first appeared in 1993 – one was the wacky styling with its rather narrow body and that kicked-up rear end, the other was how capable it was off-road. The result is another car that for all its leather-upholstered luxury – at least in the top-specification SE or SVE versions – makes an excellent pay ‘n play off-roader, particularly in short-wheelbase form. One good point is that most body panels are galvanised so rust isn’t a problem. Look out for a £300 early LX 3-door if you want a cheap ‘n cheerful off-road funster, while £2500 will get you a luxurious 2.7 TD SE five-door of 2000 or 2001 vintage. Note that some of the long-wheelbase cars were seven-seaters, useful if you want to involve the whole family in off-road adventures. The most popular version is the 2.7 turbodiesel, so these are most common second-hand, though it’s worth looking out for the later 3.0 Di which is not only more powerful but more economical.

To read the full report see the October 2013 issue of 4×4 Magazine. Buy it here