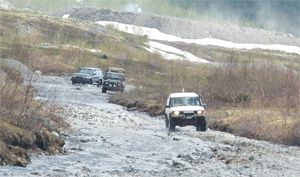 An expedition with World 4×4 Adventures into Arctic Russia has Steve White mesmerised by the sheer beauty of its remoteness and the tough off-roading, as Land Rovers share the trails with a Soviet Gaz 66.

In any other country the old guy would be eligible for some sort of social help. He lives in a wooden shack miles away from the nearest other wooden shack, drinks water from a well and eats fish he catches from the sea behind his ramshackle house, but the fact that the Arctic Circle passes through his backyard means that his garden has become a bit of a tourist attraction.

Planks etched with the names of distant cities are roughly tacked to a totem pole pointing across the White Sea, but everywhere in the world is a long way from this place. Robb, one of the two tour guides, was having a seaweed bath on the shore and the other, Frank, was leading the group around pointing out bits of war has collected. I only arrived in Russia a couple of days before, but I already knew that many things here are not what they are back home.

We rang the mournful bell, that in yesteryear tolled solemnly out through the fog guiding the blinded fishermen home, and then headed to a village hall where we were treated to a customary welcoming ceremony. With a group of traditionally dressed ladies singing haunting songs about their fisher husbands lost at the sea, it felt more than just a welcome, it had the effect of an initiation, and, with a tear in my eye, I danced and held the hands of a lady who lives in a different world to the one I know.

I booked this trip on the strength of an article about the same company’s tour of Croatia and the photos on the website. But I have to say, as good as they are, the photos just don’t do this place justice. I guess people brought up in the temperate zone just can’t imagine what the Arctic really looks like, or comprehend the mind-altering remoteness of it. It’s hardly ever in the news, so I guess the preconceived idea of vast frozen white wastelands trodden only by the paws of Polar Bears remains unchallenged.

All at sea
We drove for hours, although that fact that we were driving off-road, stopping every now and again to negotiate our way around broken bridges, our modified route actually taking us in the sea, made the distance seem longer. But just when I thought that we must be coming to the end of the world, we came to a perfect little village of wooden houses clustered around an estuary, the older buildings beginning to sag back into the permafrosted earth. 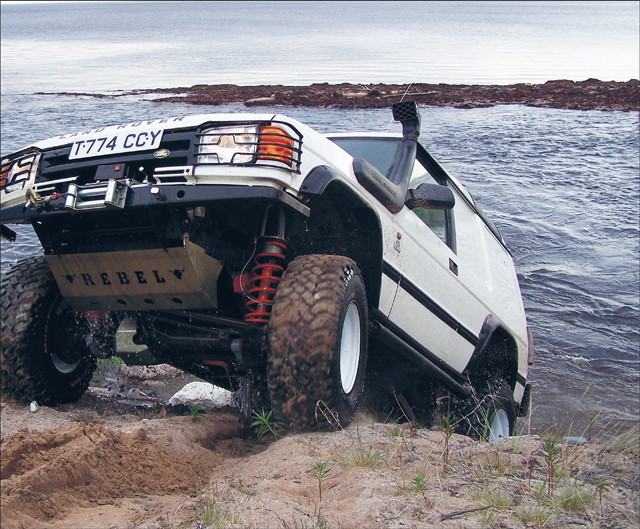 We pulled up at one of the last houses and another old guy ventured out to greet us with a big smile. This is his home, he’d set the table for us, stacked logs in both the fires and warmed up the banya. It didn’t feel like we were in a hotel, it felt like Robb and Frank were introducing us to their friends. Robb is British and Frank is Dutch, but both are long time expats in Russia and this works really well. They both love Russian culture, know a lot about it, yet they have a European mentality so the tour works out as very balanced. I’ve been on tours in the past with very knowledgeable local guides who, at the same time, had absolutely no idea about what Europeans wanted from a holiday and that spoilt the experience. It was Robb who led us into the steaming banya, a soaking wet sauna, where the water dashed against the stove creating a stinging steam. It said 110 degrees on the wall, but I couldn’t believe Robb when he says it really is. But then there came the best bit – when you can’t take the heat any more you just run out of the door and take a few steps to dive straight into the White Sea. We repeated the process three or so times and it was an amazing experience. If dancing with the local womenfolk was an emotional initiation, the banya, and the vodka we had after it, was a physical one.