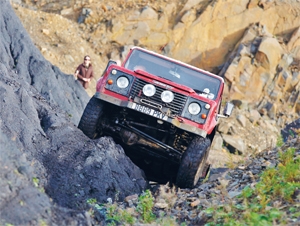 This is a unique off-road event, where teams from the public match up against the best from the Armed Forces. And it’s not all extreme off-roading either, this can be a family event too – provided you can read a real map!

Mudmaster delivered the kind of experiences that crews won’t stop talking about for weeks. It’s an MSA-approved navigational trial event, appealing to a wide cross section of 4×4 users, from out and out road legal challenge vehicles to family weekend offroaders, plus, of course, teams from the UK Armed Forces. Held at sites across Central Scotland with the aim, according to the organisers, of “improving road safety, developing both on and off-road driving and map reading skills”. In reality, it was much more exciting than that.

Tasks included a road safety test, on road observed driving, manoeuvring tests, navigational tests, road taxed vehicle trials, plus a green road run option that required navigation on roads, forest and farm tracks. It was a real winner, introducing some teams to the countryside for the first time, while letting experienced greenlaners enjoy some scenic, sometimes scary, trails normally not available for public use – ideal for shiny 4×4 owners.

Saturday morning at a military depot near Dunfermline in central Scotland saw a mass turnout of 55 4x4s, including 10 teams from Northern Ireland, it was a brilliant sight. Crews chatted happily in the watery morning sun after scrutineering, and it was immediately apparent that Mudmaster had attracted teams from all over the country. Old school maps and notes only were allowed during the 150 miles that were covered over the two days, no satnavs or geo-locators, but timekeeping mattered with penalty points for lateness at each time control. A road book was issued to each team showing grid references for the sites on OS maps, plus detailed maps of the sites themselves. For the trials sections, no time limit applied, just log in and out of sites such as at the Twechar test area. For the Orienteering Sections, the crews scored points by finding a number of code boards located round an off-road site, preplotted on a photocopied map or aerial photo in the road book with a bogey time (a time set before starting by the course builder based on how long they think it will take to complete a section) to keep them focussed. RTV’s required steady driving to get through the canes or gates, 10 in all, with red markers for the left, and white for the right. Start at the 10 gate, finish at the one gate, and if they missed hitting that, zero points meant a perfect score.

Read more about this 4×4 adventure in the Winter 2012 issue of 4×4 Magazine. Buy it or subscribe here