The race is on to create the most refined, road-friendly SUV. Fortunately off-road enthusiasts are still able to lay hands on the one car that holds true to the original concept of the recreational off-roader, the spiritual successor to the charismatic CJ-7 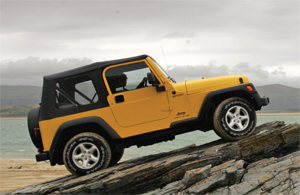 Some 4×4 enthusiasts might be excused for thinking that most manufacturers of four-wheel drive cars have lost the plot, putting the emphasis on sleek style, comfort and refined road manners at the expense of off-road capability. The truth is they’ve written a new script in which the SU of SUV stands for Significantly Upperclass rather than Sports Utility, with very profitable results. Even Jeep, the company that set the whole recreational off-road ball rolling 60 years ago, has succumbed to the lure of the mainstream big buck by aiming their new Cherokee squarely at socialite suburbia with none of the genuine utility of the original Cherokee.

Jeep has at least clung to one small element of its iconic past, in the form of the Wrangler. The Wrangler had a tough act to follow – it was the replacement for the CJ-7, which back in the 1970s in Renegade form with punchy V8 power, launched the whole concept of the high-fun Recreational Activity Vehicle. In reality the first Wrangler, developed and produced under AMC ownership, was a bit of a cost-cutting compromise, basically fitting CJ-lookalike panels to a shortened Cherokee uni-body frame and hanging the axles on leaf springs, so although the stated aim was to make it a more refined, driver-friendly car, it actually had little more refinement than the CJ-7 and significantly less off-road ability in its standard road-safe low-riding form. Enthusiasts were therefore over the moon when in 1996 Chrysler upgraded the concept with the TJ Wrangler, reverting to a separate chassis, reinventing the iconic styling cues of the CJ-7 while also achieving the double-whammy of better on-road refinement and enhanced off-road performance by adopting long-travel coil springs all round. This car is, unquestionably, the true conceptual successor to the CJ-7.

It couldn’t last; by 2006 Chrysler couldn’t ignore the need to upgrade this historic but dated pattern with a more family-friendly body, including four-door format, along with more economical and environmentally friendly engines. The current Wrangler is still a very capable off-road vehicle, but no one can deny that it’s lost some of that soul-lifting fun for fun’s sake image of the CJ-7… and the TJ. The change had to happen, though, as evidenced by the worldwide sales figures; where the TJ sold at an average of 80,000 units a year through its 10 year lifespan, the new Wrangler instantly upped the ante to an average of 130,000 units a year. To put this in perspective, Land Rover proudly announced their millionth Discovery in 2012, after 23 years of production; Jeep sold nearly a quarter of a million Wranglers in 2013 alone. That popularity is being echoed in the UK; at a recent Jeep Owners’ Club meeting, Dean Stogdon, sales executive for a Surrey Jeep dealership, turned up to put the new Cherokee on display. He told us: “I sold seven Jeeps last week – six of them Wranglers.”

To read the full report see the October 2014 issue of 4×4 Magazine. Buy it here