Two cars of very different character striving to achieve the same end – the Subaru struggling to shake off its dowdy image, the Yeti crashing the SUV party with bold styling and gimmicky features. But which is the most sensible second-hand buy? 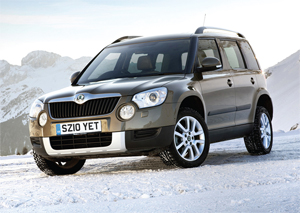 There’s something about the combination of keen pricing, the promise of legendary reliability, impressive practicality and unconventional styling that makes the Skoda Yeti hard to resist, a situation backed up by its maker’s boast that it’s become one of the most successful vehicles in its class worldwide, and one of the best-selling compact SUVs in Europe. How is it, then, that we were hardly aware of its existence for several years before its first appearance in our magazine as a contender in our 4×4 Of The Year comparison for 2012? Almost certainly because of its rather oddball appearance, a design exercise that exhibits a total lack of any of the 4×4 or off-road styling cues that would more immediately have brought it to our attention. However, when we did sample the car we couldn’t have been more impressed, awarding it the winner’s spot in the mid-range class with the comment: “Looks, and slightly odd names, can be deceptive; the Yeti seems to have passed us by, which it is now obvious is our loss.”

From a practicality point of view the Yeti scores in being a more estate-like design than most other crossovers, which gives it a significant advantage not only in luggage carrying capacity but also the extra headroom and, thanks to its wrap-around rear window design, better visibility for rear seat passengers.

As with so many modern urban SUVs the Yeti comes with a choice of two-wheel drive or four-wheel drive. The four-wheel drive system requires no driver input, it’s an auto-engaging system that allows the front wheels to do all the work under most conditions, with drive being added pretty much seamlessly to the rear wheels if either of the front wheels loses traction; for anyone who cares it’s the popular Haldex system, fourth-generation up to the facelift for 2014 which among styling and interior tweaks also switched to the less complex but more refined fifth generation system. In the updated version of the Yeti for 2014 there’s a clearer split between the 2WD road-only Yeti and the Yeti Outdoor, which can be specified with 4×4.

We’d always been much more aware of the Subaru Forester, partly because it had been around for a lot longer, and also through the sporting connotations of its rally-proven boxer engines and permanent four-wheel drive system. Even though there was not much more 4×4 or off-roading emphasis in its styling, it was always a good car to drive, especially the turbocharged versions. The third generation Forester is a more stylish car than the original, still not really exciting enough to stand out among the many other mainstream SUVs, and disappointingly the range no longer boasted a high-performance variant. As we commented on the then new Forester in our 4×4 Of The Year contest for 2009: “Subaru’s traditional presence in the rugged estate car sector has taken a new twist, with the all-new Forester joining the broader mid-size SUV brigade. Exterior styling is not too dissimilar, which isn’t really a great recommendation, although the interior at least looks higher class despite some fit and finish quibbles.” Where the original Forester had impressed us with its remarkably good off-road ability, the later model seemed significantly less competent, in spite of retaining low range gearing in manual-transmission versions, even if only because it looked and felt more road-biased than its predecessor. The manuals have a proper geared centre differential with automatic lock-up in slippery conditions, while the automatic shares drive to the rear wheels through a multiplate clutch only when the front wheels lose traction. The Forester is still a pleasing car to drive, and although it lacks the rear-seat flexibility of the Yeti it’s still a practical family car, though as with the Skoda its compact dimensions make it a five-seater in name rather than in practice, since the rear bench is patently shaped for two and is a tight squeeze for three abreast.