It had to be a real adventure, and so there had to only be one route, traversing the continent of Africa, from north to south. The choice of off-roader was perhaps a little more surprising, as the journey was completed by Nissan Patrol 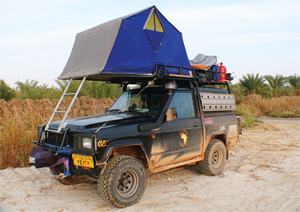 Having previously criss-crossed Australia in a Nissan Patrol, I had always had this dream about a ‘real’ expedition – to have to dig myself out of mud, to be dirty, camp in the bush and maybe also feel fear of fierce locals or wild animals. Itches like this need to be scratched and so a plan was made; my partner, Andrea, and I would cross Africa, from north to south.

The first question, however, was what vehicle to use; Land Rover, Land Cruiser or stick with the Nissan Patrol that we knew so well? After looking at prices, we quickly realised that it had to be a Nissan Patrol, so we bought a black SWB Nissan Patrol 2.8-litre TD.

We spent the following 15 months building, repairing, and welding. First, out with the back seats and in with a bespoke drawer system. The production bumpers went, as well as the side steps and we started planning the replacement parts. As my brother-in-law is a fabulous welder, he offered to manufacture reinforced bumpers, roof rack, swing-away doors for jerry cans and a spare wheel. Happily we agreed… what we didn’t know was that he is a pedantic, precise welder who took six months to make all those parts.

We had often read about winches and that they were indispensable for such a trip. And an Engel fridge as well. And this and that and those… When we finally had all the equipment on and in the car, our Patrol looked like a slammed expedition vehicle – something was wrong! We had not even wasted one single thought on the suspension, and so we finally decided to buy an OME heavy-duty suspension kit. To be honest, those springs didn’t really convince me, so I inserted another leaf into the back springs.

The other problem was our hard top – it’s great that you can easily transform this car into a cabrio, but there is no way it can carry a long roof rack with a roof tent, spare jerry cans, another spare wheel and all souvenirs and artifacts. So on top of everything we developed a frame structure, which reached down and was bolted to the chassis. And then, finally, in October 2008 we were ready to go…

To read the full report see the August 2014 issue of 4×4 Magazine. Buy it here