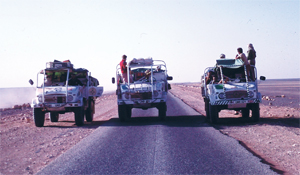 This is a story that has gone untold for nearly three decades. A group of inexperience Brits tackle the Dark Continent in a group of tired, second-hand, unreliable Unimogs – in search of ancient cave drawings. And adventure. They found both.

This story is about 28 years late for the copy date, but as far as I know, no other account has ever been published in any other mainstream journal. It’s the story of 30 or so people from all walks of life brought together for an ambitious journey to catalogue and record petroglyphs (ancient rock carvings) in the Tibesti Mountains in Northern Chad.

It was all so long ago that you will have to forgive me for any inaccuracies, I kept no diary so this is written from memory with a bit of poetic licence thrown in. The vehicles were bought from the £1000 each we contributed and from numerous sponsors who were supporting the project. It is also a story of a major change in direction of my life as it saw me shift from a career in car design, a dream for many these days, to working for the best part of the next 20 years in the circles of the adventure travel business.

I had always been interested in Land Rovers and 4×4 trucks and the drawing office at Longbridge was not what I wanted out of life. An internal vacancy came up at Land Rover for a technician in Angola and although the initial interview went encouragingly, my second interview didn’t fare quite so well as my boss at the time decided I had a job, so failed to tell me the date I was supposed to be interviewed at Solihull. Annoying and frustrating that such a blinkered attitude was at the time, it’s an ill wind that blows no good and as a result – understandably – I wanted to get away from the drawing office with a passion.

The newly established Overlander magazine ran a few ads in the back and one was for mechanics to go on an expedition to the Sahara driving Unimogs. If that ad was printed today, the phone would be swamped with enquiries but back then, I was the only mechanic who had applied, though I have to add there were some good engineers. The whole idea was put together by a 40 year old photographer called James Locke, and while personality clashes occurred during the trip with various members, I have to say that he risked a lot on the trip he hoped would launch his expedition career and certainly kicked off mine. With hindsight anyone in full possession of all the facts would never have embarked on such a venture but I would have missed out on a great experience and a springboard for nearly half my working life trotting the globe.

When I got hold of James on the phone and he cheerily suggested to meet him near Huntingdon as they had to purchase a further two Unimogs and he welcomed my input. We arrived at a field full of 1960s 404s Mogs, they had been there some time and James suggested I pick out two crew cabs for the trip. This wasn’t hard, as only two would ever have run again; most were full of water and pretty much scrap. Yes, they would be prepared ready for our collection next week so we went back to palatial house of the owner and finalised the deal. The elderly vendor to had the menacing air of an old school gangster, complete with his glamorous and equally hard-edged female partner. The whole business seemed to ring alarm bells from the start.