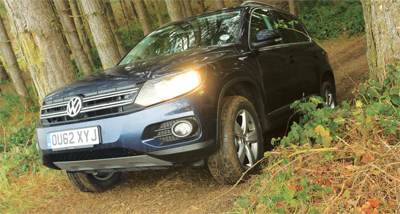 Our Escape model is the off-road version of the Tiguan and therefore comes in at a smidgeon over £2000 more than the standard model. Both are equipped with VW’s 4MOTION intelligent four-wheel drive that kicks in when the system detects poor traction. I have always been a bit sceptical about these so-called ‘intelligent’ systems as they are reactive, i.e., you need your wheels to experience a bit of a problem before the electronics suss it out and then react accordingly and switch power delivery to a more even split between the axles.

I prefer a vehicle that lets me lock into four-wheel drive when I say so; which is why I will always be a bit wary of the intelligent SUVs that are swamping our 4×4 market these days. Yes, regular readers know that I am an old fashioned gal who loves a nice big transfer lever that you thrust into four low and know damn well that it is locked in and off you go into the wilderness.

The previous long-term Tiguan was the first SUV I have driven for any length of time without such a reassuring gearstick attached and I felt rather a fraud in it, having only owned ‘real’ 4x4s and driven long-termers with said reliable and familiar 4WD transfer levers.