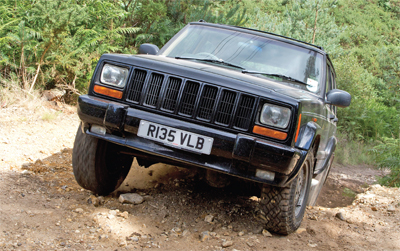 It was a nervous few minutes early on a Saturday morning as I eased the transfer lever back a notch. The yellow indicator lamp saying ‘part time’ lit up on the dash, but had four-wheel drive actually engaged? I eased the gear lever into reverse, felt it clonk into gear, and the car eased gently backwards. No graunching, clicking, rattling or screeching sounds, just a gentle creep backwards. Then I selected Drive and eased the Cherokee back up the driveway. Then the lever went back another notch; no sign on the dash of a green ‘full time’ indication, but the Jeep drove backwards and forwards again without hesitation. I then yanked the stick all the way back to low range. The ‘part time’ lamp lit up again, and as I eased the Jeep up and down the drive again it did, at least, seem to be in low range.

The reason for the caution is that I’ve heard so many scare stories of how the Cherokee’s transfer box seizes up if it isn’t used, and there’s no escaping the possibility that the London-based lady owner who had the car for the first 15 years of its life had never put it into four-wheel drive. The second owner had kept the car for only six months before I bought it, and I’ve often wondered if the reason he sold it on so quickly was because four-wheel drive didn’t work. Under the circumstances I dared not wait until the car was away from home before trying to engage four-wheel drive, in case the transfer box simply seized and left me stranded, hence the careful try-out on the driveway.