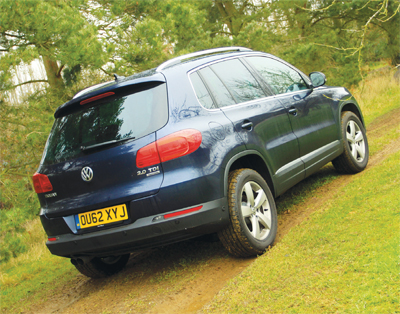 So last month we said farewell to our ES Tiguan and now it’s a big hello for the winter to our VW Escape, just in time for the wintry season.

Temperatures have dropped, there is a severe frost outside and some parts of the country have been thwarted by horrendous floods and heavy snow; and we hope that our Escape gets to play in some wintry conditions to see just how good it is. The Escape is the ‘off-road’ version which has a more off-tarmac amenable body shape with an improved approach angle of 28° (from 18° in the ES), thanks to the shorter nose, and the ‘off-road’ button. It also sports front underbody protection plus side and underbody protection pack.

That button supplies a variety of programmes that include Hill Descent Control, Hill Climb Assist, regulating the throttle to provide torque when required and increasing the sensitivity of the cross-axle braking system. I have driven an Escape model at VW’s HQ in Wolfsburg and, although the course was a concrete man-made affair with nothing slippery on offer, it performed remarkably well driving up the insides of a pipe at what felt like close on 40 degrees, and the Hill Descent Control was impressive.