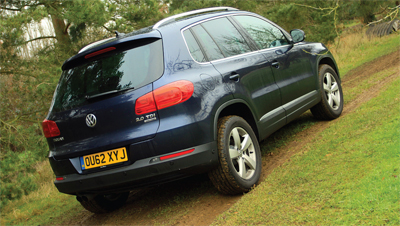 So now it is time to say goodbye to the VW. We’ve had a Tiguan of some description on the fleet for a long time and have got to know them well. The Escape model was a decent upgrade to the standard auto-engaging SE that we ran for six months previously. In the most recent winter snow it was comforting to have the additional off-road switch, which meant a smoother journey in the deep snow that Kent enjoyed, and the increased approach angle that the redesigned nose of the Escape offers.

The Escape is really not a bad off-roader, it’s just that, being a lower-slung SUV than more traditional off-road vehicles, it feels inappropriate to take it anywhere really rough. Although the Escape’s angled nose allows for more serious playtime, the lower ground clearance that crossovers/modern SUVs offer makes me rather nervous to tackle anything too strenuous.

I have had a play in it at our friend Ian Wright’s place down the road at West Malling around his tree-lined route and it acquitted itself well. And, in the snow, once I got over the initial slight slippage from the highly road-biased rear tyres, before the traction kicked in, it felt pretty safe and secure on the treacherous country roads. I can only imagine how good it would be with some decent winter/ATs on it.