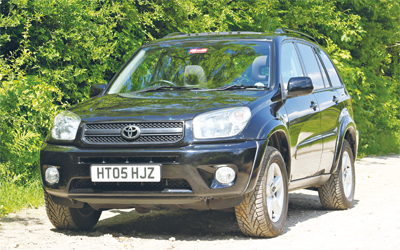 Another RAV4? Some might accuse me of a lack of imagination, but in truth, the finances wouldn’t stretch to a Range Rover Evoque. The Editor had one on test recently; a manual (which I had not driven) in Dynamic spec. I have to say that I really fell for it, somehow the fact you had to physically change gear got you a lot more involved with the car, and if I could, there would be one parked on our drive…

It’s somewhat ironic, therefore, that we were actually driving the Evoque when we first went to see my new RAV4. Regular readers may know that I had a 2002 model, then completed 105,000 trouble free miles – not all of them with me, but certainly most of them were. I really like the RAV4, it suits me, is nice and light and easy to drive and since if I need anything ‘tough’ to off-road, then I can always borrow the Editor’s Hilux.

We actually sold my ‘old’ RAV4 to the first person who came to see it, from a 75p advert in the local Newsagent’s window; a lot cheaper than using Auto Trader. However, it was Auto Trader that we used when we searched for a newer model and quickly saw a black 2005 model for sale quite close to us in the village of Woldingham. It was a reasonably low mileage at 38,000 and within the price range so, since we had the Evoque at the time, we went to see it.