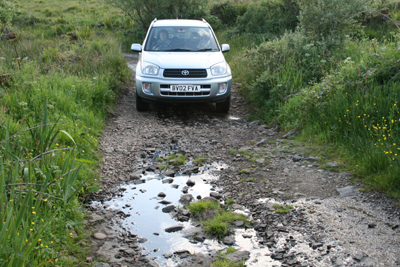 The anniversary of the purchase of our Toyota Rav4 led to something of a marathon drive, and a great week’s exploring and off-roading in Scotland. A tough test for a vehicle that clocked up the 100,000-mile mark on our return to Surrey. Best of all, however, the Toyota never missed a beat!

The purchase of the Toyota in June last year was always designed to give Sue a daily driver, and one that would allow her to actually get to this magazine’s Kelsey offices in deepest, darkest Kent regardless of what the weather brings. The previous year, the snow had virtually cut-off the Kelsey offices for a couple of days, to anything but a 4×4. And the Toyota was Sue’s choice, and personally I have always thought the thing a ‘nice’ car and very suitable for a woman… somehow it’s not that tough for us hairy-chested folk. What we threw at it this June, however, has made me reconsider.

Our annual holiday this year was in Scotland, first a trip up to Largs in Ayrshire (now officially the luckiest town in the UK, as that’s where the recent multi-million pound winning Euro lottery winners live – or should that be ‘lived?’). From Largs we were to spend a week sailing around the isles of Arran and Bute in the Inner Hebrides. For the second week, it was back to Largs and the Toyota, for the scenic drive up passed Loch Lomund to the ferry at Oban, and then over to the Isle of Mull for a week’s exploring both on, and off, road. As it turned out, even being ‘on-road’ driving around Mull necessitated the need for a decent 4×4!

You can read more about this Toyota in the September 2011 issue of 4×4 Magazine.