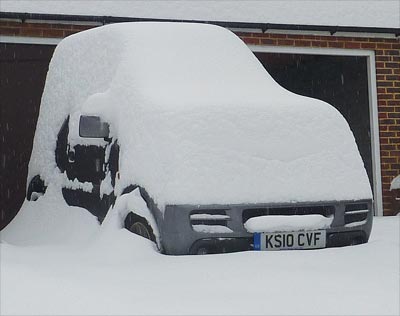 As you can see from the picture right, our diminutive little Suzuki almost completely disappeared in the heaviest snowfall I have ever seen in my corner of West Kent.

Unlike my own Jeep Grand Cherokee, the Jimny didn’t have the benefit of a roof over its head during the severe winter weather and so had to put up with a very deep layer of snow sitting on it. As it was such an effort to clear off all that snow the Jeep got more use. I also preferred the Grand as its engine breaking is far superior from the 2.7-litre diesel than the Jimny’s 1.3-litre petrol engine. There area lot of steep, slippery hills to negotiate around here and I didn’t want to put anything at all to chance as I weaved and crept around all the abandoned saloon cars which really shouldn’t have been on the roads.