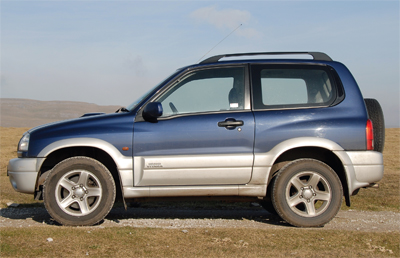 As June and MOT time approached, the ominous bumping sounds from beneath the Freelander became louder. I’d say, ‘surely you can hear that now?’ as we’d encounter a minor road hump and looking round the delightful leather cabin. I’d think, ‘it’ll never pass its MOT and the costs will mean sayonara for our well travelled friend’. One day, taking my daughter, two grandsons and my mother-in-law around Southport, I realised that the familiar strange creaking from under the rear seat that accompanied every journey had stopped. Some weight on the rear seat was all that was needed to cure that noise! I felt sure the other rumblings were serious and was dumbstruck when my regular mechanic Phil emerged to say there was nothing wrong with the elderly Land Rover; not even the tiniest advisory.

Meanwhile, my daily driver, the Grand Vitara was clearly suffering from a lack of attention, was handling like a drunken camel and decided with little warning to wear out its nearside front and offside rear tyres, a bald patch running on the inside rim of the front one due to a slow puncture and centrally across the offside rear, which was more of a mystery. The cheery chap at ATS tyres emerged from the workshop, wiped his hands and told me my very expensive Bridgestone Duelers were trashed.  I’d thought it was the return of the old alloy rim causing the leaky tyre problem. Off we went to Phil’s garage and concluded the offside rear shock absorber was to blame. The subtlety of bounce and rebound was lost on me. I couldn’t see the difference between the two rear corners as Phil leant heavily on each side of the bumper and watched for the shock absorber to return to position. If it carried on bouncing, this was bad and was exactly what the offside one was doing and accounted for the central wear on the tyre. Mmm, expensive.