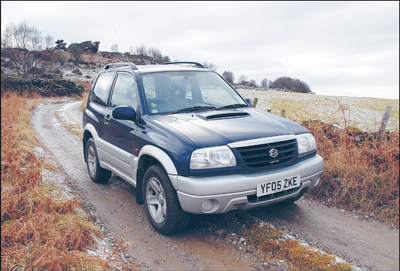 If Monday this week saw me well and truly into my second half century, today was also a significant milestone in my Grand Vitara’s (we hope) long relationship with the open road. As I pootled through Long Preston, a village on the A65 along the stretch from Skipton to Kendal, the numbers on the milometer suddenly changed from 40 something to a tidy 50,000. If my Suzuki had been a horse, I’d have patted it on the neck and given it a carrot.

It had been a good day, not too much chugging and no sliding at all really, even on the wet bits; leftovers from hilltop rain sluicing down into overworked gullies and forming puddles of a depth that can surprise. Ever since I spent a whopping £700 (give or take four pounds) on the beast between Christmas and New Year to cure the sluggishness and a seeming lack of revs, of which a cracked diesel filter housing had been the chief suspect, the Suzuki has continued, determinedly, to behave as if it is in way too high a gear for the speed. I’m lucky if I can maintain third gear when stuck behind ditherers who hate driving and think 40 is a suitable maximum speed; ‘quite fast enough for anyone’ as my dad used to say in his twilight driving years. A teeth-rattling diesel chug is standard, then, on the road, more so when I steer to the left. Off road and in 4 high, the problem evaporates. Hmm, must mention this to Jeepman Phil, when I finally admit defeat and take the Vitara back to him for further tinkering. Or maybe my 4×4 has the menopause…

Suzuki Grand Vitara
Spec: 3dr SE 2.0L Tdi
Mileage: 50,014
MPG: 32
Recent costs: No extra costs except £6 to have the relative luxury of some nice men clean
it while I played Bizet’s Carmen on the radio
Arrived: October 2008