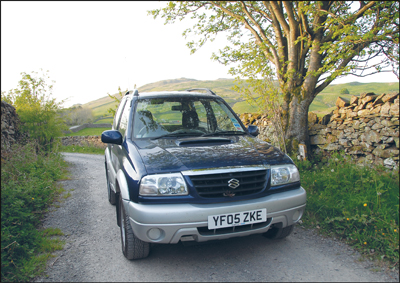 As the year leaps optimistically forward from spring to summer, the weather taking alarmingly retrograde steps as it does so, I note that my amazing rear tyres are still not ready for renewal; after three months of testing they cling on to their 4mm of tread depth like little ones to their mother’s apron strings. I’m not complaining; the cleverly designed Bridgestone Duelers have rolled on for well over 54,000 miles. I have a sneaking suspicion that the front tyres were replaced too soon, wasting me nigh on £250, even if I did fret at the time that the winter ice might get the better of my attempts at road holding if there was less than a chasm between the channels of rubber.

If my tyres are being kind, I know that my imminent insurance renewal and now overdue servicing will be less generous towards my poor purse. On an uphill start from cold, my engine sounds more like a flatulent wildebeest as each day passes, the diesel clatter bouncing embarrassingly off the local dry stone-walled lanes. I feel, also, that there’s a touch of wind passing through some slight fissure along the length of the exhaust (I do hope not) and the front wheels that Jeepman Phil, my regular technician (as they call them nowadays) sucked through his teeth over at New Year have still not been attended to, and the possible binding brakes are still an issue – and their pads squeal as badly as ever. All this, however, hasn’t stopped me putting 1500 miles to Land’s End and back last week, with a spot of moseying in between.

You can read more about this Suzuki in the August 2011 issue of 4×4 Magazine.