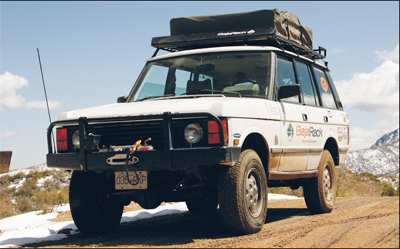 What a month! Another 1700 miles into this journey means another 1700 miles of chasing mechanical issues – thank goodness for friends, quick and accurate mechanics, and www.rangerovers.net! After arriving in Phoenix, Arizona with a new fuel pump and filter but continued sputtering, bucking, and stalling problems, friends Chad Manz and Doug Lawyer from the Arizona Land Rover Owner and I swapped out a few parts in an attempt to fix the old girl. No such luck. We were supposed to leave for Hole in the Rock trail in southern Utah in two days but with it being literally the middle of nowhere, Kels stayed home and I warmed Doug’s passenger seat. Thank you, Doug!

The next stop after Hole in the Rock was the Overland Expo held in Amado Territory south of Tucson, a quick three-hour drive from Phoenix. The turn around time between returning from Utah and leaving for Amado was less then twelve hours so there was no time to get her fixed and I sincerely thought Kels could be limped the three hours to Amado. Again, no such luck. We didn’t make it three miles from Doug’s house before I was calling the tow truck.

You can read more about this Range Rover in the June 2011 issue of 4×4 Magazine.