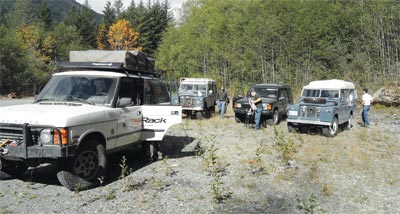 With the new transmission only a week old and an upcoming trip of 5000 miles around the corner, I decided another test run was in order. Our somewhat unofficial Vancouver Island Land Rover Club had a day trip planned and it seemed the perfect opportunity. Greg Sutfin led the group of five Rovers in his Series IIa 109in along the backside of Lake Cowichan on easy, gravel, logging roads. The day was sold as a ‘no scratch’ trail so when we came across a series of washouts, we turned around and headed home before reaching our destination. It did what I needed, however, in finding any last-minute problems with ‘Kelsey’.

The transmission ran fine but a hesitation while under load had me concerned and she was running very hot, although there was no change on temp gauge. I swapped out the thermostat, fuel filter and finally carried out a field repair my friend Chad Manz had performed on my fuel pump wiring harness in June in front of a library at 23.00hrs on a Saturday night in Phoenix, Arizona. Just for the record, shrink wrap will hold two wires together for several thousand miles in gasoline without any obvious deterioration to the plastic.

The hesitation was still there, however, so next came new spark plugs and wires. She ran wonderfully after that and we headed to Vancouver to start our trip to the National Land Rover Rally in Moab, Utah.

She ran perfectly for about 50 miles and then the hesitation came back along with an obvious loss of power and horrid gas mileage.

This time the hesitation was more like a black out when all electronics blipped out for a second: Ignition switch? One of the problems of living in Canada is that obscure Rover parts are hard to come by, especially on a holiday long weekend. Thinking I should install the new spare ignition amplifier in case that was causing some of the problems and that I could bypass the ignition switch with a push button starter, I headed to a Rover friend’s house to start the repairs.

I learned a valuable lesson about distributors that day – when marking rotor placement, use a permanent marker. I replaced the distributor and turned the key once, before calling a tow truck.

Don MacDonald of Rover Tech performed a small miracle getting ‘Kels’ running better than ever as one problem led to another and then to yet another and so on. What he thought would take one hour turned into six before he let me go with a stern warning that the shocks, ball joints and bushings were all dangerously bad and that the steering should not have 15 degrees of play in the wheel.

The early morning drive was the final straw as the ignition cut in and out, making the headlights fl ash obscene comments in Morse Code to oncoming traffic. After a week of chasing problems, I called for help and headed back to the island to buy a plane ticket to Salt Lake City for the National Rally and SEMA.