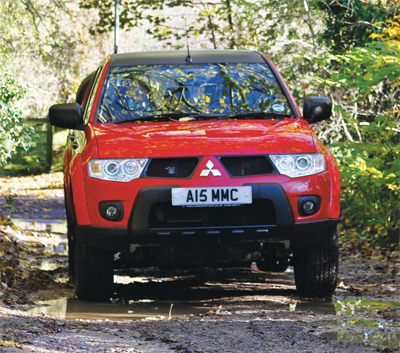 It’s arguable which manufacturer can actually claim to have started the ‘lifestyle’ pick-up idea, but high up that list has to be Mitsubishi. The arrival of the L200 in 2005 certainly raised the stakes and helped extend the market for what previously had been a purely commercial sector. The L200’s unique design, especially the rear door/loadbed treatment, produced a machine that people wanted to be seen in. Looking at the latest incarnation parked alongside my ultra conservative Toyota Hilux, the new L200 Barbarian Black is certainly something to be seen in! Resplendent in violent bright candy red, you only need to add a couple of ladders to the back and it could pass as some kind of private performance fire engine.

This model is at the high end of the L200 range. For a number of years, Mitsubishi has had the performance Walkinshaw model; a name that surely has lost its potency in 2013. For many, Tom Walkinshaw was something of a motorsport legend, but you probably have to be well over 40 to remember him. Calling a model a Barbarian has the kind of macho inference that is timeless, but even that needs a regular nudge and re-invention, hence the arrival of the limited edition Black model.