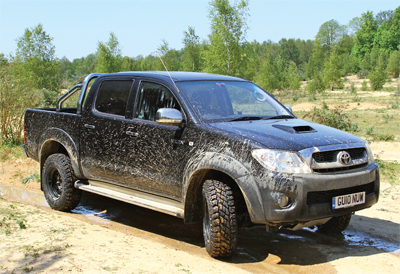 My original decision to buy the Hilux was really by a process of elimination. Returning to the Editor’s chair of this magazine after (quite) a few years absence, the Alfa GTV on the drive and Lotus Elise in the garage didn’t quite seem suitable! My first thought was that I would get a Jeep, and this was thanks to the excellent bargains available on the second generation Grand Cherokee (something we highlighted in our Buyers’ Guide last month). However, Hils already had one of those on the magazine’s fleet, and with Bob having a Cherokee, we seemed a little ‘Jeeped out’. There was no chance of me getting a Land Rover, I’d have one of the latest models tomorrow if my Lottery numbers came up, but back in the real world the thought of a Discovery or ancient Range Rover filled me with dread… Then it came to me that I should have a pick-up. Once decided, the option as to ‘which one?’ was simple. It had to be Toyota Hilux.

It also had to be a double cab, so that I could have the pick-up’s useful load carrying capacity, yet still have a four-door vehicle capable of carrying four adults. I also went for the 2.5-litre turbodiesel engine, just to keep the insurance down a bit. The engine has run faultlessly, and delivered a reasonable 33-35mpg, interestingly regardless of how it is driven or whether that’s lots of short urban trips, or long motorway drives. We have used the load carrying capacity a lot, and one of the truck’s final treks while under my ownership will be the day after this is being written when it will take four adults and a significant amount of sailing gear from Surrey to the north west of Scotland for our holiday, which this year is cruising around the Inner Hebrides. Well, it’s off-road!

The truck has been well looked after by Jemca Toyota, my local main dealer based near Croydon. A big thanks has to go to Glen Kebble, one of Jemca’s senior technical advisors whose helped with a number of projects on the vehicle, including actually fitting the ARB underbody protection kit. This is a tough, no nonsense, series of shields that bolt in place of the Toyota’s rather flimsy shields and give you that extra bit of confidence when off-road. Glen also spotted immediately when I trundled into the garage one morning, sounding something like a Sherman tank, to quickly deduce: “Your cat’s been stolen!” It seems this is one of the downsides of pick-ups, in that scum balls seem to be able to roll underneath and remove the catalytic convertor – even when the vehicle’s parked on your drive. When calling my insurance broker Adrian Flux about the loss, it was apparent that it is a pretty regular occurance and it was all sorted quickly. The cost? A new Hilux cat, fitted, costs a cool £1200.

You can read more about this Toyota in the August 2013 issue of 4×4 Magazine. Buy the magazine here