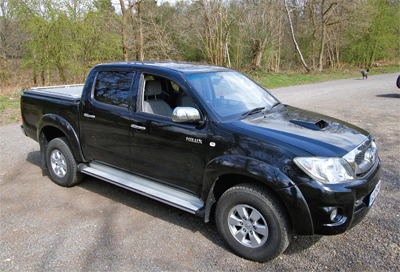 It took a long time, but finally I’ve done it. From the very start of my Toyota Hilux ownership, some 18 months ago, I’ve been going ‘to do something about it….’ The problem with the Hilux, and any opened backed pick-up is that despite the fact that you have enormous carrying capacity, it’s not actually very secure. You can’t just sling things in the back and forget about them; they’d get nicked, and they’d get very wet! The only option, therefore, is to have bags and cases behind the front seats. To help this, the Hilux’s rear seat folds upwards and so there is a massive space, and it does have ‘privacy glass’ to help mask what’s being carried, but it’s not secure should you park the vehicle and leave it for any period. There are two ‘secret’ hidden compartments under the rear seat (don’t let anyone know) but these are small, only really useful for documents, wallets etc. They are not even big enough for a decent sized camera.

The answer, obviously, is to cover the load bed, and so this got me searching through the ads in this magazine and then looking at associated websites. To be honest, money was a major reason and I was looking for the ‘cheap option’. However, after a lot of research, trying to find a cover that would fit and allow me to keep the shiny chrome sports bars was not possible, my choices came down to only a few options. There are some glassfibre tops on the market, but they never looked particularly secure and the designs put me off. In the end, I opted for the load cover that I had wanted from the very beginning; the chequer plate Mountain Top.

You can read more about this Toyota in the June 2013 issue of 4×4 Magazine. Buy the magazine here