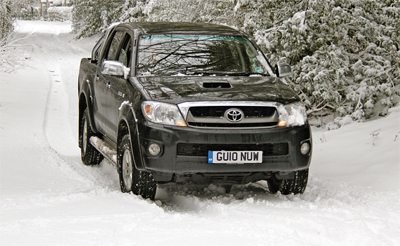 Some weeks ago, while driving my truck one evening, I was a little concerned when the ‘low fuel level’ light came on. The worry was because according to the actual gauge, I had a nearly full tank. This meant that one of these things was incorrect, but which one? Since it was late, and I was in very rural Norfolk, and it was very, very cold outside – the temperature gauge actually said minus 9degC – I didn’t want the error to be the amount of fuel in the tank. Just an electric glitch on the low fuel light, surely…

A few days later I filled the tank to the absolute brim to see if that ‘tricked’ the warning light to go off, but it resolutely stayed on. Now, I’m of the opinion that to ignore a warning light, even one as simple as this, is a bit stupid, but I have to admit it was a week or so before I managed to find the time just to call my local dealer Jemca Toyota, in Croydon. Speaking to Glen Kebble, one of the technical advisors at the dealership and the man who usually works on my Hilux, it seems I was not alone in having the problem. Toyota had seen a few other Hilux owners mentioning the issue, and they were therefore looking to change the fuel filter free of charge, if I would like to book it in. Glen also asked if I had noticed a drop in performance, which to be honest I hadn’t really noticed.