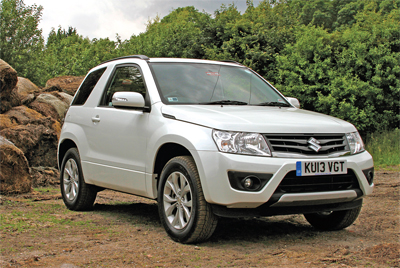 From the thumping macho behemoth that was my Hilux, to the nimble, buzzy, almost hot-hatch like three-door Suzuki Grand Vitara. Madness. Actually, it doesn’t quite work like that. My personal Toyota Hilux has now gone – after a hugely successful trip to Scotland for my recent sailing holiday. We had four adults and more clothes, sleeping bags, wet weather sailing gear, booze and food than you can imagine, completing an 800 mile round trip, effortlessly. Am I sad to see it go? Certainly, and I still haven’t decided what to buy next. In the meantime, I’m going to have a few months of long term testing with our new Mighty Mouse off-roading Suzuki!

OK, so the Suzuki, especially in three-door form, does look somewhat ‘cute’ and may not appeal to everyone. Look at the spec, however, and it does start to appeal to this writer. It is powered by a 2.4-litre 16v petrol engine, that just loves to be revved, and delivers 166bhp and a very reasonable 225Nm of torque, which has to be one of the biggest capacity engines for a small SUV on the UK market. It’s very sprightly and we fear that enjoying that might make it reasonably thirsty – something that we will be reporting on.

Mighty Mouse also has a proper Low range option, electrically switchable, which can be locked for when the going gets tough. It’s very tempting to actually get tough, more of which in a later issue. The SZ4 model Grand Vitara comes with 17in alloy wheels, which when parked alongside my Hilux made the Toyota’s 15in wheels look particularly, well, stupid. The version that is ‘our’ model is £17,330 on the road, metallic paint would have been £450 extra, but ours is a very smart white – ideal mouse colour!