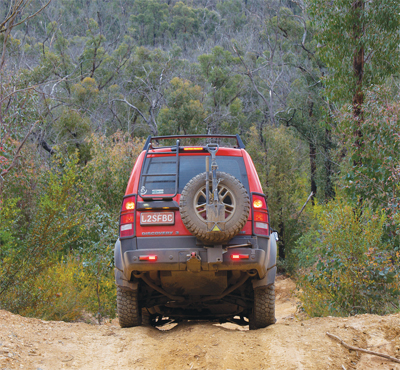 Our Discovery 3’s odometer is now about to tick over 80,000 miles, many of which have been off-road, carrying a load or both. Lots of things wear out and need replacing over time – tyres and fluids of course, but also suspension. Sure, the Discovery has air suspension, which can be inflated so it doesn’t sag, but eventually everything wears out and for suspension in particular the dampers are a case in point. The Discovery was becoming rather too floaty over corrugations and bumps at cruise, and even at lower speeds the suspension bounced over rather than absorbed the undulations. So time for replacement dampers, but not a lot of choice. I spoke to Bilstein and found they have withdrawn their product from the Aussie market permanently, and then had a chat to Koni to discover that their product has also been withdrawn, albeit only temporarily. After a bit of research the best remaining option seemed to be the Land Rover standard kit, and as our Discovery is under warranty – thanks to a two-year extension programme – that was also the safe choice. So on went a set of shocks and, as ever with suspension changes, there’s quite a difference in handling, and that’s apparent even around town. There’s less pitch when accelerating, less nosedive when braking and more assured handling around the corners. And there’s better traction off-road, as all the sophisticated traction control in the world won’t help if the tyres aren’t well and truly in contact with the ground.

So with new suspension doing a good job of supporting the fully laden Discovery we’ve been off camping again, this time on the coast of Victoria. This was an easy trip, but as ever, somewhat unplanned. We meandered through a forest we’ve not been through before, and set a new family sighting record race for monitor lizards, counting eight in the space of an hour. Lace monitors are largish lizards that grow to up to two metres in length, and known for spending a lot of time in trees. However, they come down to forage about for food, particularly carrion, and they do love a dead kangaroo, which is where we found two of them enthusiastically munching away. The lizards detached from their meal when we arrived, but stayed around long enough for me to photograph them with their tucker. As usual with such occurrences we also took the opportunity to explain the concept of carrion and the food chain to the kids, as it’s much more real and exciting if you see it happening in front of you.