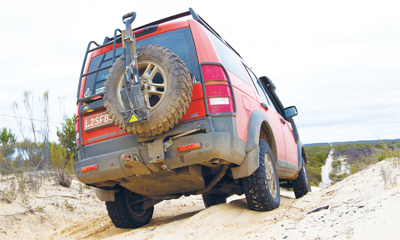 The first set of tyres I put on the Discovery 3 were a set of General Grabber AT2 265/65/17 all-terrains, in passenger-reinforced construction. I’d always run light-truck construction tyres, so I thought I’d see how the passenger-construction tyres fared. Well, the answer is badly. We picked up three or four punctures in the course of 60,000km when I’d normally expect a trouble-free run. Then I went to Morocco, and found our Discovery 4 was the only vehicle to suffer a puncture. Back in Australia and on a recent trip one of our group stopped, then rushed to catch up, ripping a sidewall on his passenger tyres in the process over a tree root that really shouldn’t have caused a problem. The moral there is not to rush, because that’s when all sorts of bad things happen, but it also highlights the fact that for serious bush use you absolutely need light-truck construction tyres, and in the highest profile you can fit. In the case of the Discovery 3 that’s 245/70/17, unless you want to start fitting oversize tyres, which is a whole new discussion.

So I’ve learned my lesson, and back to the bulletproof light-truck tyres, which are presently BF Goodrich Mud Terrain KM2s. I will report on them in a future update, but so far they’ve survived tens of thousands of off-road kilometres in all sorts of terrain. But they didn’t survive a recent school run. Ironic really, our car goes anywhere and does anything, yet what happens is that Mrs P manages to rip a 4cm gash in a sidewall at school, and an inside sidewall at that which is very unusual. To do that with those tyres takes some talent, but anyway we’ve replaced the rubber and we’re rolling again, on for the next trip. But first there were a few little maintenance jobs to do.