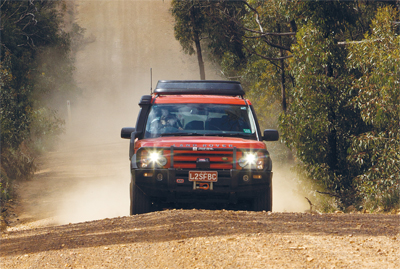 Human beings need a certain level of stress to perform at their best. If they find a situation too difficult, needing to process too much information too quickly, demanding a level of skill and concentration beyond their abilities then fatigue and distress is the result, leading to underperformance. On the other hand, a very easy task or boring that requires little focus means boredom and complacency, leading to mistakes and again underperformance. The answer is eustress, a stress level enough to keep the human interested, engaged and in the zone of best performance.

Driving on long, straight, bitumen roads in a D3 is for me, boring. The car needs little attention and there’s not much to do. It’s not exciting, and after a few hours I feel tired, in the same way you’d feel tired after doing nothing on an airliner for half a day. But dirt roads are different. These are a constant challenge, not a difficult one, but enough to put me into the eustress zone as there are frequent corners, changing surfaces, different cambers, rocks to avoid and much more. I once drove all day on dirt roads to Australia’s northernmost point with people unused to such conditions, and they couldn’t believe how fresh they felt after spending that amount of time in the car. It was because we were never bored.

So I welcome the chance to drive on dirt roads, and there was an unexpected chance recently when we returned from a trip heading southeast. The traffic slowed, and we stopped with a line of cars stretching all the way into the distance. Sound familiar? Fun? I think not. But we were in rural Australia, and that means dirt roads out either side. Just got to find them.