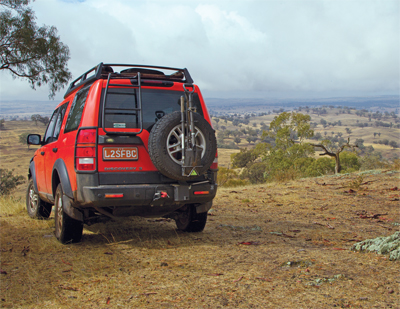 Last month I reported that our Discovery 3 was reporting no less than three faults – park brake light flashing, suspension height error in off-road mode and an engine system fault accompanied by black smoke and a loss of power. This month the fixes are in, and they’re all simple – a software update solved the first two, which were as usual with modern Land Rovers related even though they’re in entirely different parts of the car, and the third was the common split turbo hose replacement. So the D3 is returned to health and we’re continuing to appreciate the car’s performance and versatility. Our latest run was a 1000km drive to the 2013 South Australia Land Rover Jamboree, which we comfortably managed without refuelling thanks to our second fuel tank. Once there, we relaxed with friends and other Land Rover owners, enjoying a nice small campfire as conditions permitted.

A group not too far away started what’s known as a ‘white man’s fire’, or a rather large one! It’s easy to spot the campfire novices, they burn through lots of wood in a short while, creating impressive looking flames, which are pointless and dangerous. A good campfire is just half a metre in diameter, and you want to get to the big logs as quick as you can as those are the ones that ember up and really push out the heat without smoke or flame. And the bigger the fire, the harder it is to put out, and the more dangerous it is. Campfires should be put out with water, not covered over with dirt or sand as that simply insulates the heat. Many a kid has burnt their hands on such ex-fires, and the heat is such that the fire could easily re-ignite. So we watched the other group, and then their fire jumped, igniting the grass, but they were able to hastily put out the flames just before we got there to help. Did I mention another fire rule is to clear the immediate area around your campfire? That’s why. But once properly under control there’s really nothing like the soothing sight of a nicely controlled bush TV, good wine chilled in the car fridge and congenial company. That really is the life.