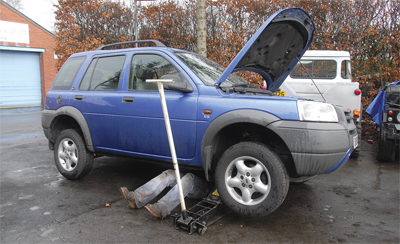 Buying a ‘new’ second-hand 4×4 is always daunting, yet as I open the first of two service books in the neatly presented folder and survey the almost spotless leather upholstery, I feel better. The passenger seat looks barely used, the back seat pristine. At first glance, only the slightly worn leather covering steering wheel bears witness to the 200K mile club membership the Freelander has earned itself. The first full service took place at Herbert Engels dealership in Krankelsweg on 16th January 2002, with 5184 miles on the clock and the most recent, including the air con in July 2012 at 200,513 miles at Hunters Land Rover in Derby, along with replacement of a chafed intercooler hose. Further inspection of the most recent of the pile of photocopied receipts reveals that the brakes were overhauled in November 2012.  A tiny patch of rust under the rear nearside window mars an otherwise near flawless body, joined by a couple of superficial car park dents along the doors and the road grime of one last sleet filled journey from Essex to a family run garage in Skipton where the last exceptionally careful owner traded it in for a Freelander 2 (also with a fair few miles under its tyres).

‘How much do you want for it?’ I ask hesitantly, emotions mixed because my dream of owning any sort of Green Oval has just collided in a happy accident with the desperate need for my other half to have some cheap wheels, his company car about to be snatched away along with his job of 31 years.  ‘Only £1200, as we can’t put it on the forecourt with that sort of mileage on it’, the nice chap replied. The Freelander was rolled into the workshop and I had a good look underneath. Where was the rot? It looked in better shape than my Suzuki! Two sleepless nights, hours of doom laden Googling ‘high mileage Freelanders’ and two road tests; the first accompanied by a deafeningly loud clunking under the front wheels in response to every bump and the second only by the thrum and pull of a beautifully cared for TD4 engine after the anti roll bar bushes were replaced by the garage (Peter Watson’s Skipton). I sorted the insurance and we took the plunge.