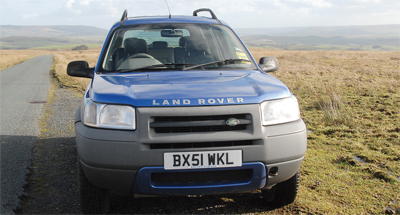 After months of rain the venerable Freelander, like everything else, is becoming rather soggy. Pressed into service on alternate days to eke out the miserly mileage allowance permitted under the unreasonably expensive insurance terms, the Land Rover’s eager TD4 engine is relishing the 90 mile commute my other half has begun travelling each day, a more economical if tedious VW Golf doing the other 50 per cent of what are currently very wet journeys. As a result, the old blue Freelander is becoming cosmetically rather sad looking. Kept outside, the metal window seals are crimping even further, giving their rubber coating a curled appearance, the rust spots are spreading and the rear door is becoming even tattier. I dread the day if and when the incredibly complex rear window cum door lock mechanism breaks. Nevertheless, with the repeated deluges something was bound to give.

The windows seemed to be steaming up when the Freelander was parked up overnight and on getting in the front seats they had damp spots. Pondering the cause, we were dripped on. The sunroof, that other complicated, and to my mind, unnecessary piece of kit, was leaking. I stared at it in dismay. I had no idea where to begin and am not great with online forums, finding them mostly filled with bitter complaints and wacky theories.

You can read more about this Freelander in the April 2014 issue of 4×4 Magazine. Buy the latest issue here