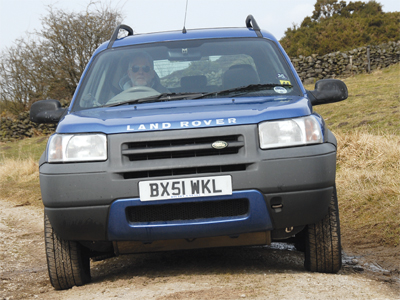 Keep your voices low but while the Automobile Association may have been frantically busy with plenty of other stranded drivers this last month, the elderly blue Freelander has had absolutely no need of their services, stoically ploughing up and down the roads of the north of England with little more than an odd and so far, annoyingly elusive, clanking noise over the offside wheel arch for accompaniment.

A recent and very welcome development in our household was the immense relief felt when the other half managed to secure a new job after a relatively short two months of nail-biting uncertainty. This has meant that the Freelander is now expected to take him the 140 mile return trip along three different motorways to work every day until we find a more economical alternative, though the creature comforts of the ES, with its airy, beige leather lined cabin are rather seductive. Neither of us are on the tall side so headroom is not the issue, I imagine it might be for a six-footer in the driving seat and the legroom, a dream compared with my Grand Vitara. This particular TD4 Freelander has spent its life on the long straight roads of Britain, with no evidence of off-road play, the BMW diesel engine happiest when on those long journeys and it seems content to continue for the moment, again smoother and more confident pulling up hills than the Grand Vitara. Even at this great mileage the engine makes the Peugeot offering in my Suzuki Vitara, despite regular servicing, seem like a bag of nails. On near new Dunlop ST20 road tyres, the Freelander clings to the corners like a train, with none of the scary drifting the Suzuki treats you to if the needle’s anywhere near 40mph, and the temporary chicanes imposed by the recent snow drifts even on the main roads have not given the rock steady steering any cause for concern.