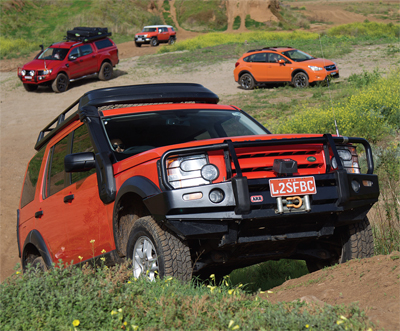 Every so often your brakes will wear out, and as is usual with any vehicle component the extra stress of off-roading means more frequent replacements. Brakes are no exception, as a touring off-road weighs more than a standard car, and then you’ve got grit and mud getting in the discs as well as extra use downhill. Traction control also wears a little, although that has much less effect on brake wear than might be thought.  This is because when a spinning wheel is braked to transfer torque to the other wheel on the axle there’s little force required to slow the spinning wheel – unlike the force required to brake a two or three tonne 4×4.

Anyway, off with the wheels and it was clear the Discovery needed a change of rear discs, and any time you change discs it’s a good idea to change the pads too. So that was done, but the electronic brake sensors weren’t the right ones so I left those off, and decided to just live with the dash light saying, now incorrectly, the pads were worn. So all was well until Mrs P reported a “funny noise” under braking.

It sounded from her explanation that the brake pads were worn… but surely not, how could she burn through them in a couple of weeks? I mean I know she and her mates like to turn the school run into an autotest, but it didn’t seem right. I did a little test drive and noted the noise was always there, regardless of whether the engine was running, and it varied with speed, and it was coming from the back axle.