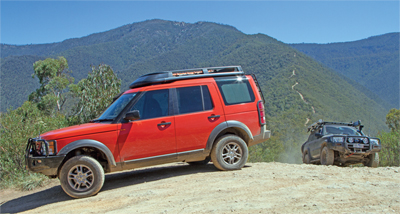 Last weekend we were out again in the summer Aussie heat, camping and exploring, and in those conditions a swim, perhaps the most relaxingly pleasant way to cool off.  But not just any old swim. There’s nothing quite as refreshing as diving into a briskly flowing river and being carried, with no effort on your part, downstream – it’s a depth of coolness the artificial, chlorinated swimming pool cannot match, and you need to experience the difference to believe it.

In much the same way the Discovery 3 and 4 look similar, but the latter is more capable than the former. And both have subtle and non-so-subtle mid-life updates, which improve things a little here and a little there. The D3’s traction systems were sophisticated in 2005, but now the very latest D4s now sport an eight-speed automatic and traction control that works harder when wheels lift off the ground and a range of other improvements. The differences can be hard to spot, but they’re there. A little like the oft-discussed question of whether the optional e-diff is worth the money, and what affect it has.