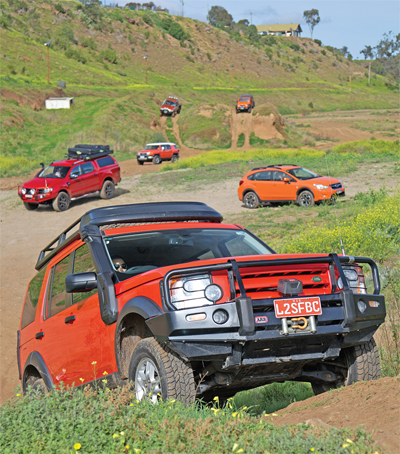 Perhaps the most commonly discussed topic in Discovery circles is that of tyres, and on that front I have news. Back in the April 2013 edition I reported that the D3’s BFGoodrich KM2 mud tyres had worn out, and I was replacing them with the least aggressive tyre I’ve ever owned on a 4×4; Cooper AT3s. The logic behind this was simple; after years of driving stock-standard press cars with standard tyres I’ve still managed to have a lot of fun and get pretty much anywhere I want to go. This is because over time vehicles are becoming more capable, with ever-more effective traction control, power delivery and suspension. Even today, my 2008 Discovery 3 can hold its head high, and while it is modified the mods are all about touring, not off-road capability. Tyre technology has also progressed, with punctures becoming so rare road cars are omitting spare tyres entirely, and traction has improved across all surfaces.  Yet for all that progress punctures are still entirely possible and in the ongoing war of sharp mallee roots against tyres it is fair to say nature is still well head.

So what I decided on for the next set of boots was a tough, light-truck construction tyre with a gentle all-terrain pattern, and that was the AT3. The results so far have been very good – on road grip and noise is as you’d expected, a big improvement over the muddies, dirt-road grip is also good and initial impressions in mud indicate the tyre offers grip there too although I’m yet to get right into some thick gloopy slop. Snow performance so far has given no cause for concern either. What I can definitely report on after last weekend is their performance on steep, rocky climbs, which is excellent, far better than I thought given the tread pattern. And toughness – no marks, no damage despite the D3 being heavily loaded over much rough terrain.