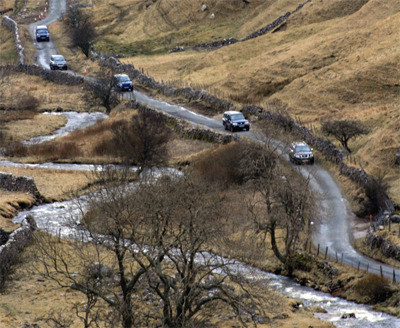 Well, after an eventful first few months to the year, there were thankfully no surprises in Discovery ownership throughout April and May. After finishing the multiple jobs that had reared their head I was looking forward to some peaceful driving. The only expense I have had to fork out for was a pair of light guards courtesy of John Craddock Limited. After fitting some rear light guards over two years ago I finally decided to bite the bullet and go the full way and guard-up the headlights. The easy to install kit was in my opinion a bargain at £61.75 delivered, however these were for the replacement items at half the price of genuine Land Rover parts. However I have been informed they may no longer be available in the future, so the genuine article will be the only option – good timing!

Now the plus side is all the lights are protected from the rogue cow or stray pheasant but cleaning the lights will now certainly be a challenge!

Following this modification and repairs it was time to put the Discovery off-road – what is was designed for. A weekend event was planned with our local vintage club to take a pack of 4x4s across the route of a yearly charity road run. Every year a group of tractors mainly from the Cheshire Vintage Tractor & Engine Club (CVTEC) take part in the ‘Three Coasts’ charity road run which involves driving from Hale in Merseyside across to Whitby and back on their tractors in June over a number of days.