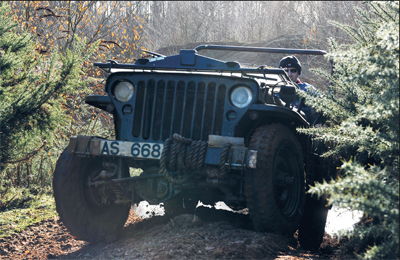 Derek was thinking: ‘I didn’t mean to get into this position, but there’s no point in stopping now – pedal to the metal and hope it all comes right!’ It was the moment I thought he was going to put Eugene’s rollover bar to the test for real, the moment I realised I was actually watching the underside of the Hotchkiss as it scrambled by, showering mud from its whirling bargrips.

I guess it was Gary’s fault. He had seen the Hotchkiss and expressed an interest in doing a little off-roading. Naturally, I’d invited him to join us at Boxgrove to have a little drive round in Eugene. Gary did take it very carefully for the first few minutes, so much so that he was making hard work of some of the obstacles. Hence I suggested that he could try going a little faster. Oh dear.

Eugene just roared away up the hill, bounded over the top and bounced and rebounced all the way down the other side. It took half an hour of waving and shouting to get Gary to cease his mud-showering antics and pull up so that Derek could have a go. I wasn’t half surprised to find Derek putting in a bit more boot than usual as he tested his own wits against the varied obstacles.