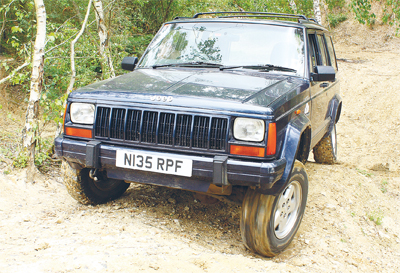 A character by the unlikely name of Lemony Snicket wrote a story for kids entitled A Series of Unfortunate Events and I’m feeling now that something along those lines happened to me and the Cherokee. I certainly hadn’t intended to part company with the Jeep, partly because I tend to consider a favourite car as a friend rather than a lump of machinery, and the Cherokee and

I had certainly enjoyed some very exciting and demanding off-roading adventures together. It’s also partly because the old truck was still running perfectly well, the engine revving smoothly, the emissions clean and the only bits that had fallen off were the items of trim I knocked off by bouncing the Cherokee off trees, rocks and the like. The first Unfortunate Event was when the exhaust started blowing.

That in itself wasn’t enough to make me think of scrapping the car; when I bought it three years ago the exhaust looked badly corroded and perilously close to falling off, and I was quoted £280 for a replacement system which I guess isn’t all that bad. However, since I was about to take part in the hard-core rock-crawling Mille Rivieres a few months later I decided to keep the exhaust and replace it after knocking if off on a French rock.

Not only did that not happen, but the exhaust stayed sound enough for the Cherokee to pass its next MOT with nothing more than a replacement exhaust clamp required. It was only a year later that, after another hectic off-road session that the exhaust finally started hissing. No problem, I said, I’ll fork out the necessary £280 and drive happily on. The Unfortunate Event two was that, after a closer examination, I discovered that as well as leaking from the silencer the exhaust was hissing out of the manifold – a cracked exhaust manifold being a fairly common Cherokee problem.