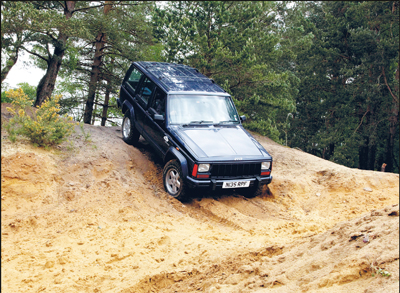 Slab Common is a military testing ground a feature of which is the interesting selection of redundant tanks lying around, lumps of seriously heavy metal that make the Cherokee feel like a lightweight city car rather than a beefy off-roader. Another feature that somehow seemed to back that feeling up was the inability of the Cherokee to haul a Land Rover out of the gloopy mud puddle into which it had sunk itself axle-deep. We naturally always carry a selection of recovery gear – straps, shackles, a kinetic rope and even a shovel, and when we spotted the Land Rover with its wheels churning uselessly against the mud we stopped, as all good off-roaders should, to offer assistance.

We might as well have just waved and passed on to our barbeque lunch for all the good it did, but then I suppose it was too much to expect the Cherokee’s tonne and a half to be able to shift a two-tonne Land Rover, with a whole family aboard, that had glued itself that firmly into the scenery. A bolder person might have tried a kinetic recovery, but I’ve gone off those, having seen too many examples of bits of car being yanked off and catapulted through the rear window of the recovering vehicle. Besides, the fact that the Cherokee lacks a proper chassis means a good kinetic pull would probably buckle the floorpan.