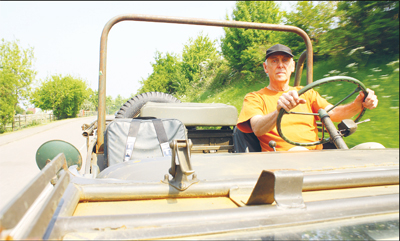 Eugene had been tucked away in the garage for a couple of months, but the sight of a sudden flurry of convertibles cruising about with their owners taking advantage of the superbly summery weather in the weeks leading up to The Wedding, proved too much of a spur to ignore. Trouble is, one of the reasons I hadn’t taken Eugene for a drive for a while is that the old truck had developed a misfire and with so much else to do during the early days of spring – tidy the workshop, weed the garden, sit around in the sun with a chilled beer – I hadn’t got round to seeing what the matter was.

One fear was that it might be a stuck valve, the recurrence of a problem that developed when TV personality Bradley Walsh drove it about at high speed in low range during the making of a television programme, working the primitive old valve train past its limits; or it could be a fouled spark plug, which though easier to fix in the short term might point to a more serious underlying problem.

First action was to check the spark plugs, a small snag being that this Hotchkiss has a completely sealed and dust-tight ignition system using military-spec plugs of a design that doesn’t match any of the standard plug spanners in my toolbox, and Murphy’s law also dictated that none of the ring spanners fitted, either. With tool shops shut for the bank holiday, I had to resort to a rusty old imperial-size open-ended spanner of muscular proportions, which worked a treat even though it needed a tap with a hammer to loosen one of the plugs.