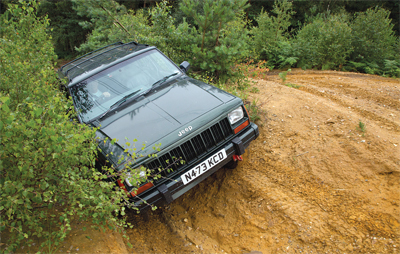 I watched with a certain amount of awe as Axel Seedig drove his Grand Cherokee up the narrow, steeply angled climb. It was more like a gulley than a track, with a couple of big humps and dips on the left which looked as if they’d not only get a car cross-axled, but would also tip it sideways into the steep gulley wall to the right if you weren’t very careful. Axel’s car, a well-modified off-roader (that has previously appeared in our Your 4×4 Life section), made it look easy, partly because the rear diff was locked up and partly because it didn’t look as if Axel cared one jot about smacking his truck sideways into the earth wall if it all went wrong.

I couldn’t resist the challenge. “I’m going to try it in the Cherokee,” I said to Pete. “Even if I get it stuck at least it might make a good photo.”

I took it easy, relying on the Goodyear Duratraks to grip well enough to ease the Jeep up on little more than tick over. Part way over the first hump and what I’d feared happened, with its nose dropping over the far end the Cherokee lifted a rear wheel and started rocking in that familiar cross-axled way. I kept it gentle, working the steering to feel for grip; none came, so I made the risky decision to back away a little and then feed a little more momentum into the equation. It worked; the Jeep rode over the hump and drove a little further up the slope.