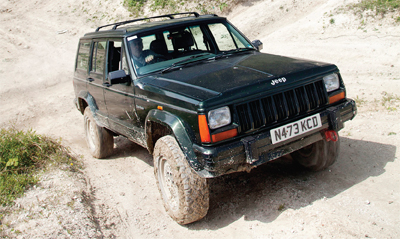 Had it been a rainy day we probably wouldn’t have got anywhere. At first glance, especially from the superbly scenic viewpoint of our picnic spot overlooking the green expanse of Bedfordshire extending to the horizon, it’s hard to understand why they call it Devil’s Pit because the first view of it is a broad field with a bit of a rise at the far end. There are, however, two factors that lift it above the seemingly mundane bit of field-crossing – one being the chalky surface of the tracks which turn treacherously greasy when wet, the other being the demanding selection of rutted, steep-sided hollows hidden away behind the trees in the north-west corner of the site. No wonder the site personnel are so keen to ensure that cars using the black-run section in this area are roll-caged and all occupants are harnessed in and protected by helmets.

We weren’t aware of that part of the circuit at first, having found even a few spots on the easier white runs a little nerve-wracking. The initial climb up to the high-level track running round the eastern perimeter is steep but no problem for the Cherokee, but the steeper angled drops down to the lower-level track running beside it looked a little too scary to attempt on such a slippery base, even downwards, let alone attempting to scale them. Even when it’s dry the clay surface isn’t easy to get a good grip on. A little further round the back there were some quite deep ruts, again enough to make me worry that I might ground the Cherokee or even get it cross-axled, but once again I had cause to marvel at the effectiveness of the simple three-inch lift – it’s just rubber bungs over the front coil springs, strongly-bowed heavy-duty leaves at the back and long-travel dampers – in keeping the body and, more importantly, the exhaust clear of the ground in such tortuous terrain.