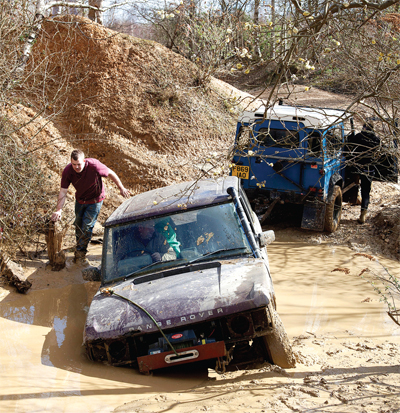 There are places I wouldn’t take my Cherokee, and that includes some of the holes at John Morgan’s Slindon off-road site. I go there quite often because it’s not that far – I reckon just over half a tank’s drive there and back, and but for the price of petrol I’d go more often – and there’s such a good variety of off-road terrain that anything from standard 4x4s to heavily modified specials can find terrain that’s challenging enough to excite without damaging the vehicle. Of course if you don’t mind a bit of damage there’s plenty of suitable terrain for that as well, such as when a couple of over-excited lads sent their Discovery sideways down a serious slope or when an overconfident chap drove his Range Rover into a puddle without thinking to check how soft the bottom was…

I admit that I don’t punish the Cherokee anything like that much, because I still use it as a road car, but even treading lightly the three-inch suspension lift and Goodyear Wrangler Duratracs give it enough extra clearance and traction to tackle terrain at Slindon that’s exciting enough to get the adrenaline going and without getting stuck.