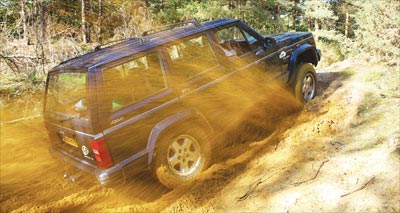 I can state with absolute veracity that putting on a show for the photographer is the only reason I got the Cherokee planted up to its floorpan in soft sand at the Hogmoor Enclosure off-road site on an All Wheel Drive Club Driveround day recently. Hogmoor has a fair variety of conditions, but its main feature is lots of soft sandy soil that can be fairly treacherous – it doesn’t take more than a few spins of a wheel that’s lost traction to grind itself inextricably axle-deep into the ground, and that’s particularly likely to happen if you’re attempting a steep climb. I had to be particularly careful, since the Cherokee’s tyres are relatively narrow 225-section Mud Terrains, and although they’re the newer type with the less-course tread pattern they’re still aggressive enough to turn the wheels into grinding discs on soft going. So, most of the time, I’d kept to the rather more stable areas under the trees, which was actually quite interesting in its own way because of the way the softer soil had been eroded away where there weren’t any trees, leaving the forested areas standing high above the surrounding terrain. That made for steep climbs up in among the trees, and it takes care to enter those areas without scraping the bodywork. Or, to be more politically correct, without barking the trees, particularly in the case of the Cherokee which has had so much bodily contact that an additional dent or scratch would simply blend in with their surroundings.