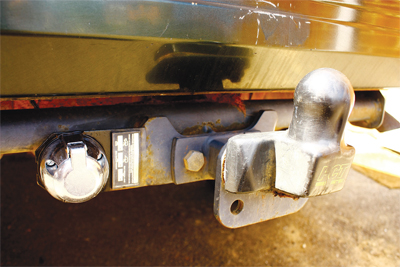 The only thing I generally tow behind the Cherokee is the Hotchkiss, and since last year’s summer wasn’t much better than this year, the poor old thing – which really needs a dry and sunny day to provide the necessary driving enjoyment –  hasn’t been out of the garage for at least 10 months. However, since we have experienced a few sunny days and there’s the prospect of a few more to come, it looks as if we may be able to take the Hotchkiss out one weekend soon, so I decided it was time to do something about the dodgy trailer lighting socket on the Jeep’s tow bar. Off-roading mud and water splashes had taken their toll on the socket’s contacts, which hadn’t been in the best state when I’d acquired the car. I figured it was time to clean the socket out with a wire brush and a strong blast of cleaning air from my compressor. However, when I saw the state of the contacts after a year’s negligence I realised there was no alternative but to replace the socket.

Halfords provided the necessary. For little more than a fiver I could have bought a nice black plastic one that would have been a straight swap for the original, but the shiny silver metal one caught my eye and I thought wow, that’s the one for me. I’m not sure it was the right choice. It got so hot in the sun that I could hardly handle it, and I can imagine it freezing solid in the winter. Still, it was only eight and a bit quid and it does look good.

Simple enough task. Or so you’d think. Three little bolts hold the socket in place, which should just unscrew. I sacrificed a toothbrush to clean the muck off the exposed threads behind the backing plate, and even sprayed on a splash of release agent to ease the disassembly. Waste of time. The bolts would not budge, thanks to having been rusting into place over the Jeep’s 18-year lifespan.

I could in fact have left the socket casing in place and simply replaced the contacts, there’s a little tag inside the casing that has to be freed after which a quick turn to the left releases the central section containing the contacts, which can then be withdrawn. Having spent the extra for the bright metal casing, however, I had no alternative but to take an angle grinder to the fixing bolts.

A quick peek into the back end of the socket revealed similar corrosion on the contacts. I could simply have cut the wires away, but I dared not lose any length of cable because the original installers had left no slack, so I reached for my little electrical screwdriver and started undoing the screws clamping the wires in place. Another simple enough task – except that these screws were also so solidly rusted into place that the first screw simply tore the end off my little screwdriver. I reached for a heavier duty item and after 20 minutes managed to loosen all the screws. To my surprise – and relief – I found that the bare ends of the wires, once freed from their clamps, were still clean and free of corrosion.

The replacement socket came with a clear diagram of which of the seven colour-coded wires should go where, but I simplified the procedure by removing only one wire at a time from the old socket and wiring it straight into the corresponding contact on the new one. The rubber-backing pad from the original socket fitted the replacement perfectly, after which it was just a matter of replacing the sheared-off original bolts with some nice shiny new ones and fixing the new socket into place. Though maybe I should have fitted a dull but probably more practical plain black plastic one – the shiny metal one looks more than a little pretentious on the back of a grubby old Jeep.

You can read more about this Jeep in the August 2013 issue of 4×4 Magazine. Buy the magazine here