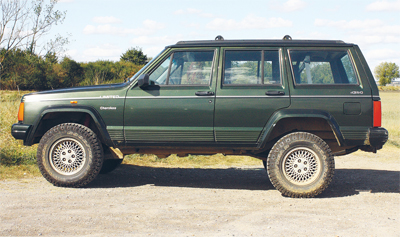 I told you you’d have a laugh, because it all went exactly as I expected it would. That’s not to say it went to plan, if you consider the plan to be as laid out in the workshop manual, which describes the removal of the Cherokee’s leaf spring in not many more words than: “Remove the four nuts securing the U-bolts to the axle, remove the two bolts securing the spring to the chassis, and remove the spring.” There is no reference at all to that bane of anyone who chooses to work on old cars – the WCS (Worst Case Scenario.)

My Cherokee being 17 years old, I knew there would be WCS moments, mainly on account of several of the key fixings being secured by captive nuts which, if the bolt screwed into them was so badly rusted into place, would quite likely shear off. I was not disappointed. There was no way the nut securing the spring to its hanging shackle at the rear was going to come away from its bolt, so I had to take an angle grinder to it; that freed the nut, but because the bolt is inserted from the chassis side out, there wasn’t enough space between spring and chassis rail to remove the bolt, so I had to knock it part way out and grind half of it off before knocking the rest of it free. Okay, so the front mounting bolt – having been liberally sprayed with releasing fluid weeks in advance – did come away without too much drama, but the next WCS moment came when removing the rear dampers.