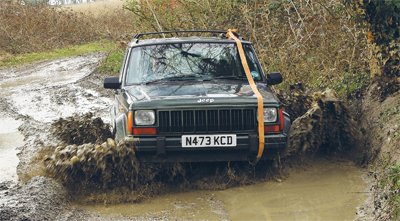 Derek, whose spatial awareness verges on the incredible, said it would go. I, whose off-roading experience verges on the historic, said it wouldn’t. But Derek is persuasive, so I relented. The thing is, the Cherokee’s ground clearance isn’t that good and it was a rather deep hole in the ground, and there was also something of a twist in the terrain that I reckoned would get the Cherokee cross-axled on the way up even if it didn’t plant its belly in the mud.

The Cherokee’s axle articulation isn’t bad, considering it’s running on its original old bog-standard springs, but it’s still quite easy to get it cross-axled. On the way into the narrow trail leading into the woodland we’d had to negotiate quite a few awkward humps, some of which required three or four attempts – we were “treading lightly” so as not to tear up the terrain – to find an angle of attack that wouldn’t lift the Cherokee’s wheels clear of the ground; the angled hump right at the entrance to the track caused a few moments of amusement as it had the Cherokee rocking precariously on its nearside rear and offside front wheels until it eventually settled nose down so that, with at least both front wheels touching down, we were able to drive it down into the beckoning depths of the rutted trail. Naturally we’d walked the track first, and the sight of that final hollow had caused me to hesitate. Only Derek’s insistence that the Cherokee would make it through convinced me to let him have a go…