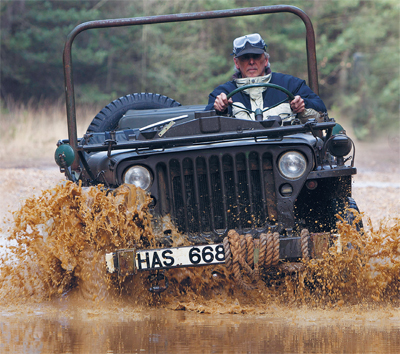 The ground was soft, calling for careful progress to prevent the bar grip tyres from sinking deep into the boggy earth below; something big had passed by this way, probably during the previous summer, churning the ground into a ripple of humps and hollows among the closely-packed trees, so the effect was almost like fighting a Hobie cat through the waves on the way to the beach, attempting not to run down any of the mass of swimmers in the process. Eugene made steady progress, avoiding the deeper ruts, steering gently among the trees… until suddenly and inexplicably the Hotchkiss came to a dead stop. There seemed to be no obvious reason – the Hotchkiss hadn’t bellied down in the soft stuff, it hadn’t become cross-axled… and then someone called out: “Oy – you’ve caught it on a tree!”

What did he mean, a tree? Did he mean the diff had snagged on a hidden stump? But no, he was pointing up, somewhere above my head. So I looked up and spotted the problem – I’d been so carefully reading the ground ahead that I’d simply not noticed the massive overhanging branch that had passed well clear of my head but which had come squarely into contact with Eugene’s roll-over bar. An embarrassing first outing of the year for the Hotchkiss.